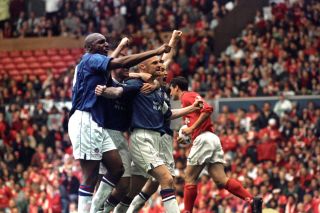 Burnley manager Sean Dyche has a very personal reason for believing VAR has to be maintained and perfected following the latest controversy with the system.

Fernando Llorente’s crucial third goal for Spurs in their Champions League quarter-final with Manchester City was allowed to stand after referee Cuneyt Cakir checked footage and ruled that the striker had not handled the ball prior to it hitting his hip and going in.

It was not clear whether the best angle of the incident was shown to the referee and there was still more drama to come in injury time as City thought they had scored the goal they needed when Raheem Sterling struck from close range.

The scenes of celebration resembled those that followed Sergio Aguero’s famous Premier League title-winning goal in 2012, but the mood soon turned sour as replays showed Aguero was marginally offside in the build-up and it was chalked off.

“It has to be there, in my opinion,” Dyche said ahead of his side’s Easter Monday trip to Chelsea. “The running of it, the streamlining of it will improve, I’m sure of that.

“It’s a necessary thing and of course it affects the emotion of the game and the flow, but there’s so much at stake in these games.”

Dyche is speaking from experience having been captain of Chesterfield for their 1997 FA Cup semi-final against Middlesbrough, when the Second Division side had a goal disallowed despite the ball crossing the line.

Chesterfield were 2-1 up at the time, Dyche’s penalty having put them 2-0 in front, but Middlesbrough equalised two minutes after the goal was ruled out and, after the tie finished 3-3 following extra-time, went on to win the replay 3-0.

“If we had VAR, I would’ve captained out a Second Division team at Wembley against Chelsea and that would probably never be repeated again,” Dyche added.

“We didn’t have that and therefore, we’re meant to go, ‘oh well, good old plucky Chesterfield’, and it just goes away.

“In theory, Tottenham could have been sitting there going, ‘oh well, we’re not going to make history anymore because they had an offside goal that was allowed’.

“That can’t be right in this level of the market. If you look at any other business in anything, they would get the margins as fine as they could to stop that from happening.”