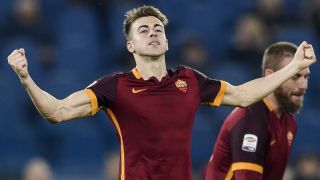 New Roma signing Stephan El Shaarawy aims to get back on his feet after enjoying an "unforgettable" debut for the club on Saturday.

Roma announced on Tuesday they had secured a deal to bring El Shaarawy in on loan from AC Milan for the remainder of the 2015-16 season.

The 23-year-old was handed a start in their Serie A clash with Frosinone and the forward repaid coach Luciano Spaletti's faith, scoring the goal to put the side 2-1 up in a 3-1 home victory.

"It’s really satisfying and I am so happy to start well with a victory for the team," the Italy international told Sky Italia.

"I gave it a go, fortunately it went well. The feeling of scoring that goal and being hugged by my teammates was unforgettable.

"I’m happy with the win, but we need consistency and as many points as possible.

"The objective is to put together a run of victories so we can get a momentum going."

El Shaarawy's goal was reminiscent of something his former Milan team-mate Zlatan Ibrahimovic would pull off.

"I learned a few things in training," he said with a smirk.

The forward insisted he is intent on getting back to full fitness and putting his career back on track.

"My problem is that I tend to drift out of the game, but with a midfield like Roma’s I can get more involved and be decisive. I want to get my fitness levels back now," he added.

"I’m working on my left foot, as in the past my teammates told me to vary it a bit rather than cut in from the left and shoot with the right. I’m working on it.

"My objective coming to Roma was to give a turning point to my career. The last few months at Monaco did not go well, I am here to get back on my feet and reach a crossroads.

"I think I’ll get the chance to express myself in this team."