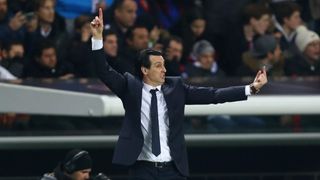 Unai Emery insists he has never had any indication that he would be sacked by Paris Saint-Germain after sealing Coupe de France glory.

PSG won the cup in dramatic fashion with a 1-0 win over Angers at Stade de France, Issa Cissokho's own goal in the first minute of second-half stoppage time proving decisive.

Emery's men lost out on the Ligue 1 title to Monaco this season and crashed out of the Champions League with a historic last-16 collapse to Barcelona, but ended 2016-17 on a high against Angers.

Chairman Nasser Al-Khelaifi declared he was "200 per cent sure" Emery would stay for next season after the Coupe de France triumph and the former Sevilla boss has always felt supported, despite huge speculation over his future ever since the Barca loss in March.

Emery told Eurosport: "My conversations with the president have always been based around the idea of continuing our work next season and into the future.

"Also, I have one year left on my contract and I am happy here.

"I believe this team can develop and with the desire of the players and the president, we can improve things. There are many good players in this team and they will enable us to keep making progress.

"I want to continue in this job and feel confident because it is very important."

He added to Le Parisien: "My regret is the championship that we expected to win at the beginning of the season, but Monaco had a great season.

"The league has been stronger this season and it will be even stronger next season with Monaco, Lille, Lyon and Marseille. All these teams will progress and this is good for the league's competitiveness, especially against leagues abroad."

Emery spared a thought for Angers after the dramatic victory, his side's third cup win of the season after the Coupe de la Ligue and Trophee des Champions.

"I would like to congratulate Angers," he said. "They were very competitive and proved they deserved to be in the final.

"We were not surprised, we played them a month ago and we knew they were a very physical team.

"We did have the chances and would have deserved to score earlier, but patience and consistency are also our qualities and that goal allowed us to seal victory.

"It was important to win this third title. We will analyse to see what needs to be changed to go further, but I am happy with the players."