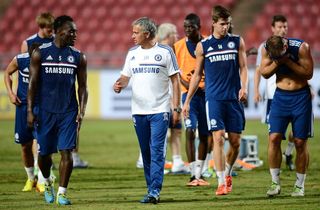 The 30-year-old spent last season on loan at Real Madrid under Jose Mourinho, as his time at Chelsea appeared to be coming to an end.

But with Mourinho back at Chelsea as manager, Essien's future in London looks bright as the 30-year-old Ghanaian is the type of defence-minded midfielder who could play a huge part for the English Premier League club during the upcoming season.

Despite his injury worries, Essien said his style remains unchanged and insists he never considered retirement.

"When you have these injuries and I've had eight or nine operations on my knees, it's hard," Essien said.

"I know injuries are part of the game but once you have them you have to relax your mind and work hard to come back.

"I never thought I should stop playing. It never crossed my mind. I just wanted to get back on the pitch. I go with the flow.

"I don't put pressure on myself or anything. I just listen to the doctors and once I'm fit and training I give everything.

"My knees feel fine now. My knees are not giving me any problems. I just have to keep myself fit and get ready to do a good job for the team.

"My style hasn't changed. I'm still the same. When you bump into me you can tell I am still as strong and keeping fit."

Essien has two years remaining on his contract at Chelsea and would not say just when he knew Mourinho, who was officially appointed in June, would be returning to Stamford Bridge.

Mourinho, who spoke about Essien's versatility, hailed the Ghana international for his loyalty.

"He is a great man and a very good player and I see him with special motivation.

"He went to Madrid because he was in a difficult situation here.

"He recovered his happiness and condition and played very important matches."