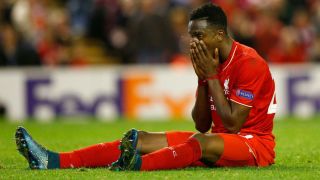 Liverpool suffered a second setback in their Europa League campaign as they were held to a 1-1 home draw with Sion on Thursday.

Brendan Rodgers' men were forced to settle for a 1-1 stalemate in their opening Group B encounter, and were frustrated again by the Sion at Anfield.

Adam Lallana opened the scoring in the fourth minute for Liverpool following good work from Divock Origi, but Sion hit back in the 17th minute through Ebenezer Assifuah and held firm to secure a share of the spoils.

Liverpool's frustration will be lessened as a result of Bordeaux's goalless draw with Rubin Kazan, which keeps the Merseyside club level on two points with the French team, two points behind Sion.

Tottenham were another English side forced to settle for a point, with Erik Lamela's first-half effort cancelled out by Stephan El Shaarawy in a 1-1 draw at Monaco. The other game in Group J saw Qarabag beat Anderlecht 1-0.

Marseille were stunned 1-0 by Slovan Liberec, who claimed victory at the Stade Velodrome thanks to Vladimir Coufal's goal six minutes from time. Sporting Braga are now top of Group F thanks to a 1-0 defeat of Groningen.

It was a disappointing night for French sides, with Saint-Etienne losing 3-2 at Lazio in a frenetic Group G encounter that saw Robert Beric and Moustapha Bayal Sall sent off for the visitors. Dnipro won 1-0 at Rosenborg in the other match in the group.

Fernandao scored a double as Fenerbahce came from 2-0 down to draw 2-2 at Celtic in Group A, which also saw Molde hold Ajax 1-1.

Gonzalo Castro spared Borussia Dortmund's blushes with a 72nd-minute strike to earn a 1-1 draw at PAOK in Group C, while Krasnodar were 2-1 winners over Qabala.

Group D leaders Napoli won 2-0 at Legia Warsaw and Midtjylland made it two wins from two with a 3-1 victory at Club Brugge.

AZ defeated Athletic Bilbao 2-1 in a Group L match, while Partizan won 3-1 at Augsburg despite seeing Aleksandar Subic sent off.