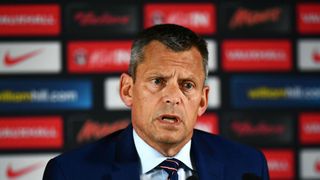 The Football Association has announced it will implement a version of the 'Rooney Rule' in order to increase opportunities for individuals from a black, Asian and minority ethnic (BAME) background.

FA chief executive Martin Glenn confirmed the move as part of the organisation's structural changes for 2018.

The 'Rooney Rule' system is named after Pittsburgh Steelers owner Dan Rooney and has been successful in the NFL since being introduced in 2003.

It ensures at least one BAME candidate is given an interview for every vacant head coaching position.

Brighton and Hove Albion's Chris Hughton is the only BAME manager working in the Premier League, while the Football League adopted a pilot of its own version of the rule at the start of the year.

Following the FA's introduction of the system, at least one BAME candidate will be interviewed for every role within the England team set-up, as long as the recruitment criteria is met.

"What it will say is the opportunity to have a career beyond playing is something that the FA is serious about promoting."