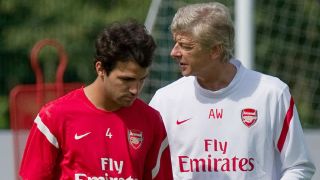 Chelsea midfielder Cesc Fabregas thanked Arsenal and manager Arsene Wenger, adding he would not be a World Cup and European Championship winner without the London club.

Fabregas made over 300 appearances in all competitions for Arsenal and won the 2004-05 Premier League title, having arrived from Barcelona as a raw 16-year-old old in 2003.

The 29-year-old Spain international was also made captain at 21 before returning to Barca in 2014.

Now at London rivals Chelsea - where he is a Premier League winner - Fabregas is still forever grateful to Wenger and Co. ahead of his reunion with the Frenchman on Saturday.

"There's something that will never change. There's many things said about me, about Arsenal," Fabregas said in an interview on Youtube.

"I don't really care what people think about me anymore. It's just about what I feel towards them.

"Arsenal will always be the team that believed in me the most. I was a young kid, 16 years old, playing for Barcelona, the youth team where it is very difficult to reach the first team.

"Arsene Wenger, especially, and Arsenal Football Club, gave me everything.

"Without them I would not be a World Cup winner, a European Championship winner. And I would not have experienced all of this that I'm doing in my life. I will always forever be grateful."