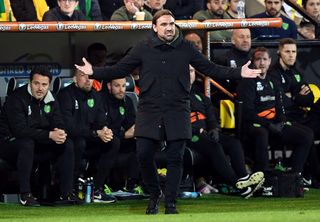 Norwich manager Daniel Farke could not contain his fury with referee Geoff Eltringham after a dramatic 2-2 draw with Sheffield Wednesday at Carrow Road.

Substitute Mario Vrancic curled in a free-kick in the seventh minute of stoppage time to earn Norwich a draw which took them five points ahead of Leeds and Sheffield United in the race for promotion to the Premier League, with just three matches left to play.

Norwich will clinch promotion on Easter Monday if they win at Stoke and either of their rivals fail to pick up maximum points, but that cut little ice with the German – who believes key decisions have gone against his side in all of their three previous games, which all ended in draws.

“I am on fire!” Farke said. “If it keeps on going like this it will be very difficult for us to win games of football.

“Situations keep going against us and it is not acceptable anymore.

“These are the facts. In the first half their keeper (Cameron Dawson) handled the ball outside the area with two strikers bearing down on him. It was a clear goalscoring opportunity and should have been a red card, but he only got a yellow.

“Then just before half-time Max Aarons has his shirt held in the area when he is about to shoot from eight yards out. It’s maybe a red card, definitely a penalty, but nothing is given.

“In the second half, their second goal looked as though there is a clear handball from their player (Steven Fletcher) to put the ball in the net.

“It should have been a yellow card for deliberate handball but the goal was allowed to stand.

“I can definitely say they were decisions that went against us – and this has been going on for some time now.

“Against Reading we had two clear penalties that were not given and against Wigan last week we had a penalty given against us which was a real joke.

“It is difficult to take and that is why I could not really celebrate Mario’s goal too much.

“The only reason we have come away with something from this game is the unbelievable togetherness in the dressing room, a great spirit out on the pitch and also the quality of our players.

“I am very proud of them tonight. We played fantastically in the first half and it was a joke that it was 1-1. We had so many chances.

“In the second half, it was very difficult to create chances once we had gone behind but fortunately there was that moment of magic from Mario at the end.”

Wednesday manager Steve Bruce was equally unhappy with the performance of referee Eltringham.

“If I was still a player I would be seething with his performance,” Bruce said.

“I can only praise my players for the way they played and it was his display which cost us. I thought he was poor all night.

“He awarded Norwich a free-kick, which having looked at it wasn’t a free-kick, after five-and-a-half minutes of injury time when only five was signalled.

“Then they scored from the free-kick and our outside hopes of making the play-offs had disappeared.”