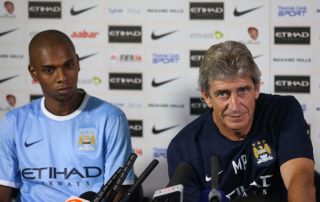 Under the Chilean, City have lost three of their opening nine matches and sit seventh in the Premier League table.

All three defeats have come away from home – the latest a last-gasp 2-1 defeat at Chelsea on Sunday – but Fernandinho expects the manager to put it right.

The Brazilian was signed by City from Shakhtar Donetsk in the close-season and has been impressed with the way the 60-year-old has started at the club.

"My opinion about him (Pellegrini) is really positive," Fernandinho told Perform. "The good results are happening.

"During matches we thought could be tough - Bayern in the Champions League for example, it was a tough game - the team did not behave well, but we could react after that game.

"He is doing a great job. He is putting the winning mentality in the group because City in the past two, three years could not pass through the group stage at Champions League.

"So he is telling us all the time we have to qualify for the next stage and win the Premier League matches as well in order to be in the top three. So at the end of the season we can have real chances to win the title."

And the 28-year-old remains confident that City will be able to challenge on all fronts come the end of the season, especially in the Champions League.

"Our aim is really clear," he added. "Our goal is to be in the final in Lisbon on May 25th. All of us have this aim to be in this final.

"We started the tournament with a new team. A team that was being rebuilt. We had some tough moments but the team is coping well with that.

"Every day, every training session, every game we are becoming a more consistent team. I believe if we pass through the group stage, our team has a big chance to go further in the competition."