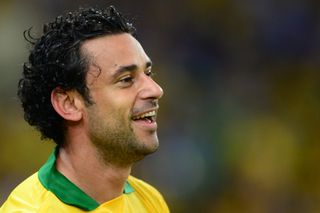 The 29-year-old has been in fine form for the national team, scoring five goals in his last three matches - helping them lift the FIFA Confederations Cup in June.

Fred was joint top scorer in that competition alongside Spain's Fernando Torres, with his tally lifting him to 16 goals from 30 caps.

And the Fluminense striker has lauded Scolari for helping to change the mentality of the team heading into the FIFA World Cup in Brazil in 2014.

"This moment is wonderful," he said. "Felipe has imposed his own style on the team and the group has understood it well.

"We won (the Confederations Cup) and we are more respected. We've looked for that respect, so much so that now rivals want to beat Brazil more than before. We are more motivated too.

"We are going in the right way. We still have to grow up a lot in friendly games to make it into the World Cup ready."

Scolari's charges take on Switzerland on Wednesday, having lost just one of their last 10 meetings against the European nation.