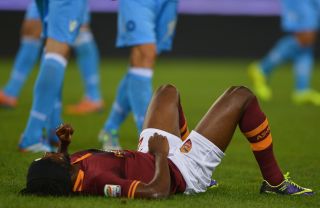 Miralem Pjanic's brace helped Roma to their eighth consecutive Serie A win, this time against one of their fellow title contenders at the Stadio Olimpico on Friday.

But veteran Totti (thigh) came off on 33 minutes and Gervinho was substituted in the second half in what could be a huge blow for Roma.

"I am happy with the win, but it was a pyrrhic victory as we lost Totti and Gervinho. They are muscular problems and will require further tests," Garcia told Sky Sport Italia.

"Nonetheless, I am happy because we won and in a tough game like this you need to take every chance on set-plays."

Garcia's men hold an incredible defensive record, having conceded just once in their eight wins to be five points clear at the top.

"We are very strong in defence, but for the moment we also know how to score goals – at least two in every game," Garcia said.

"Daniele is a wonderful player and his 'wall' with Leandro Castan and Mehdi Benatia is a solid one I've liked since the start."

Pjanic opened the scoring with a stunning 25-yard free-kick in first-half stoppage time and Garcia was delighted with the Bosnia and Herzegovina international.

"Miralem Pjanic can also take free-kicks like Juninho Pernambucano, though this one was a little different," he said.

"At the start of the summer I knew a midfield with De Rossi, Kevin Strootman and Pjanic would be very strong.

"That area is the heart of my football. Kevin played when fatigued, but he did so with great courage.

"The injuries are a problem, but on the positive side they'll give others an opportunity to play, such as Marco Borriello and Adem Ljajic."