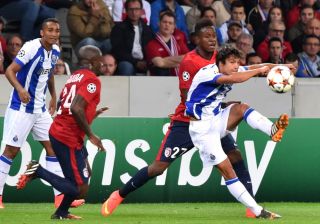 The Ligue 1 side were beaten 1-0 by Porto in the opening leg of their play-off last week, with Hector Herrera's 61st-minute strike the difference in France.

Lille struggled to assert any kind of dominance on home soil against the Portuguese giants, who enjoyed 59 per cent of possession.

But Lille were handed a much-needed confidence boost on Saturday as they accounted for Lorient 2-0.

The win - which extended Lille's unbeaten streak in the league to three games - should hold the French club in good stead at the Estadio do Dragao on Tuesday, according to Girard.

"We know what we have to do. We lost 1-0 at home, so let's be effective, "Girard told reporters.

"I have confidence in my group. It will be 150 per cent for a successful outcome. Our victory against Lorient brought more confidence and changed the look on us.

"We know that we have a difficult task ahead. But we are competitors and will not let go of anything."

Girard added: "We could have done better, but we had a large calibre opponent.

"I still believe we can do something. We did not come to pass the time. There is a qualification for the group stage of the Champions League at stake. We have more to gain than lose."