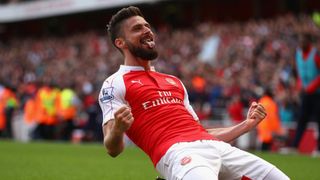 Olivier Giroud is set to stay at Arsenal after his agent Michael Manuello denied he was set to sign for Napoli.

France international Giroud has been strongly linked with the Serie A outfit, particularly with Juventus interested in their star striker Gonzalo Higuain.

The potential windfall from a deal between the two Italian clubs could free up the necessary funds to tempt Arsenal into selling Giroud, but the Frenchman's agent said his client is only focused on continuing his career under Arsene Wenger.

"Everything I've read on the Giroud is not true. I personally have only said that if Arsenal want to sell it, then we will see," Manuello told TuttoMercatoWebb.

"But today is an Arsenal player and even for a minute we thought of another project, I would like to stress.

"I do not know where [the Napoli story] came from. We never talked to Naples and there are no other persons appointed over me that can do this, we need to clarify this."

His latest statement contradicts what he told Radio CRC last week, when he said: "In Naples, my client could have a wonderful lifestyle, not to mention that Maurizio Sarri's style of football would get the best out of a striker like him."

However, Manuello was keen to point out any move was conditional on Arsenal wanting to sell Giroud, an intention the club has not yet made clear, particularly with Danny Welbeck set to miss the start of the Premier League season.

"You always need two strikers, Welbeck is out for nine months unfortunately. And 'quite normal, if you play in a great team it is natural that we should face strong competition," he said.