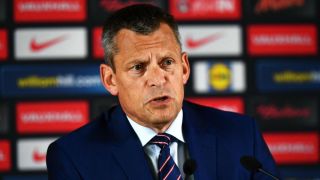 Allardyce was confirmed as Roy Hodgson's successor on a two-year contract by the FA on Friday.

The 61-year-old will sift through the wreckage of a dreadful Euro 2016 campaign, which ended in a humiliating last-16 defeat to Iceland amid familiar laments of Premier League stars failing to hit the heights on the international stage.

"Sam Allardyce is the right man for the England job," said Glenn in an FA statement.

"His excellent managerial credentials, including his ability to realise the potential of players and teams, develop a strong team ethos and embrace modern methods that enhance performance, made him the outstanding choice.

"That was underlined when we sat down to talk and we could not help but be energised by his personal perspective on England’s future and how it complemented the extensive work that we are looking to build on at St George's Park.

"Dan Ashworth, David Gill and I have carried out a thorough process in the last three weeks and ultimately we could not look beyond Sam as the ideal candidate."

Allardyce's first game as England boss will be in a friendly fixture against opponents yet to be decided at Wembley on September 1, with the qualifying campaign for the 2018 World Cup beginning three days later versus Slovakia in Trnava.