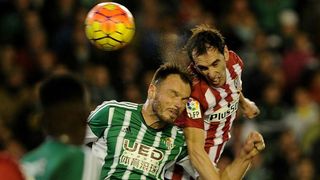 Diego Godin has warned Atletico Madrid's title rivals that his team-mates are hungry for trophies having hit the front in La Liga.

Atletico secured a 1-0 win over basement boys Levante on Saturday, capitalising on Barcelona's goalless draw with Espanyol in the Catalan derby earlier in the day to go two points clear at the top.

Champions Barca have a game in hand, but Godin hopes Atleti's lofty status can inspire their efforts across La Liga, the Copa del Rey and the Champions League.

"This strengthens us to continue working in this way, knowing that we must improve things," said the Uruguay defender, as quoted by AS.

"We are aware that much remains and that we are on the right track.

"We are also excited [to lead La Liga]. We are a very ambitious team, we will keep fighting until the end and try to win every game to fight in every competition."

Atletico travel to Rayo Vallecano in the last 16 of the Copa del Rey on Wednesday, having beaten their city neighbours 2-0 in La Liga earlier this week.