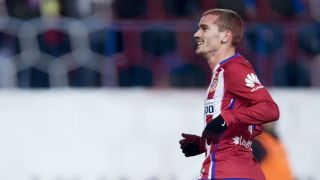 Antoine Griezmann is happy with life at Atletico Madrid amid persistent speculation linking him with a move away from the Vicente Calderon.

The France international has reportedly caught the attention of clubs such as Chelsea and Paris Saint-Germain, while Atletico coach Diego Simeone stated earlier this month that the Liga title-chasers would not hold Griezmann at the club against his will.

Nevertheless, the 24-year-old is happy to be playing a key role in Atletico's tilt for the top as they look to beat Barcelona and Real Madrid to the Liga crown for the second time in three years.

"I am feeling very well at Atletico," Griezmann told Telefoot.

"This is a big club and I want to achieve great things here. I am ambitious and my goal is to win trophies here."

Griezmann, who has a contract with Atletico until June 2020, has become a key figure since moving to the Spanish capital from Real Sociedad in July 2014.

However, he feels he still has room for improvement and is not on the same level as superstars such as Lionel Messi and Cristiano Ronaldo just yet.

"I have become more mature. The club and my team-mates rely on me," he added.

"I have become a more complete player and have to continue on the same path. I am not at my best just yet. I work every day to improve and reach my top. I am still far away from the best players."