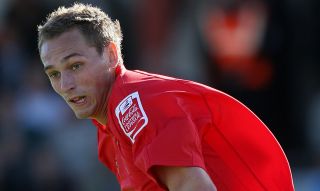 The 187cm defensive midfielder has trained with Glory for the past fortnight, but agreed to put pen to paper on Thursday.

Griffiths starred for Central Coast Mariners from 2010 until last year, when he switched to Chinese club Guangzhou R&F.

That departure attracted a $1.3 million transfer fee which remains an A-League record.

His new deal at Glory will earn the 25-year nowhere near that, but could give him great visibility in the lead-in to the World Cup, where Griffiths might be in contention for a defensive midfield role.

It's also a massive boost for Glory and could help them move clear of a cluster of teams fighting for a finals berth.

"Rostyn is a fantastic player who is composed on the ball and good in the air," Perth Glory interim coach Kenny Lowe said.

"We're very excited to have such and an experienced, dynamic and powerful midfielder join our squad.

"It's also great to have another WA player returning home and is further proof we are setting up the right foundations at Perth Glory."

As well as the Mariners, Griffiths also played in Australia with North Queensland Fury.

In all, the Joondalup product has made 71 A-League appearances over four seasons and scored seven goals.

"It's great to be home and signing on for Perth Glory," Griffiths said.

"I've had the pleasure of training with the rest of the Perth Glory squad for the past two weeks and I believe we have a really strong team that can achieve great things this season."