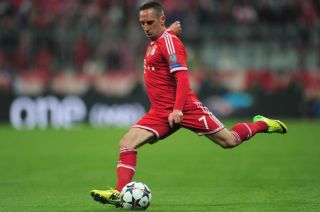 The France winger has been a key figure in Bayern's side for several years and finished third in the voting for the FIFA Ballon D'Or in January.

However, Ribery has struggled to hit his peak since returning from a spell on the sidelines with a muscular injury earlier this year.

Assessing Ribery's recent displays, Guardiola said: "It's a problem for the coach to find the right solution.

"I have to support him and I speak to him every day.

"He always fights for the team. The problem is not in his legs, it's in his head."

Bayern host Werder Bremen on Saturday in a match that falls in between the two legs of their UEFA Champions League semi-final with Real Madrid.

Guardiola's men were beaten 1-0 in Madrid on Wednesday, despite enjoying long spells of possession, and the coach is pondering changes for the Bremen fixture.

"I have to think about rotating the side, but I will decide after speaking to a few players," the Spaniard said on Friday.

"We need the same fighting spirit (as in Madrid). I said after the defeat in Madrid that I am proud of the team and the way they played."