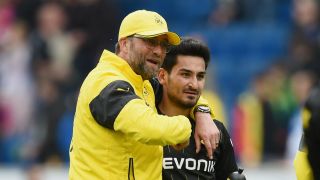 Runaway Premier League leaders City face a stern test of their unbeaten top-flight record on Sunday, when they take on Klopp's Liverpool at Anfield.

Gundogan came to prominence under Klopp's guidance as part of his celebrated Borussia Dortmund sides but the missed out on the chance to face his old mentor last season when his debut campaign at City was curtailed by a cruciate knee ligament injury.

The 27-year-old is now back in action under Pep Guardiola, who was a vital factor in making him decide against re-joining Klopp when a Premier League switch was on the cards in 2016.

Nevertheless, Gundogan continues to hold the animated 50-year-old coach in high regard.

"With Kloppo everything really started for me," he told Sportbuzzer. "Even though I won't forget Michael Oenning and Dieter Hecking [Gundogan's former coaches at Bochum and Nurnberg respectively], Kloppo was like a father to me and his speeches can be extremely motivating.

"There were times when he took the whip out, but he also embraced you and said, 'Boy, everything is okay.' He worked very well together with his assistant Zeljko Buvac who was more the tactical mastermind."

Thomas Tuchel succeeded Klopp at Dortmund for Gundogan's final season at Signal Iduna Park and he sees parallels between the former Mainz coach and his current manager.

"When it comes to trainings and working on details, Thomas Tuchel was maybe the best coach I ever had," he explained.

"He is very similar to Pep and working with him is lots of fun. I learned a great deal about tactics, keeping your position and how to attack and defend collectively. I have the greatest respect for him."

On Guardiola, Gundogan added: "Pep played at the highest level himself. He has the gift to think like the players, no matter whether you are a superstar or a player on the bench.

"He knows exactly what a professional thinks and needs in certain situations."