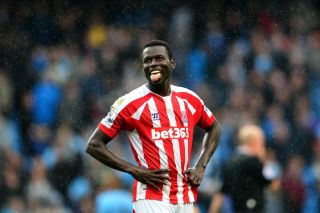 Senegal international striker Diouf only lasted 20 minutes of Stoke's 1-0 victory over Newcastle United at the Britannia Stadium on Monday before pulling up.

Manager Mark Hughes is more hopeful that on-loan Chelsea winger Victor Moses, who has a thigh complaint, will be able to make the trip to the Stadium of Light.

"Mame Diouf is not available this weekend," Hughes said.

"It isn't as bad as we thought but there is a little bit of damage in the hamstring. We are hopeful that after the international break that he will be back ready for us. If not, then almost certainly for the game after.

"Victor Moses has a little bit of tightness in his thigh which we need to keep an eye on too. We are hoping that it won't compromise him."

Hughes also confirmed that forward Peter Odemwingie will not play again this year after undergoing knee surgery last month, but there is better news regarding full-back Geoff Cameron, who is stepping up his recovery from a hernia.

"Peter Odemwingie is going to be out well in to the new year," Hughes added. "Whether he makes the end of the campaign or not is something we will have to look at.

"The operation went well and we will give him time to heal. It is hugely positive for him, and for us, is that he has a tremendous attitude. He will come back from this.

"Geoff Cameron has trained this week but he isn't yet fit enough to be involved. He needs another week before he is available."