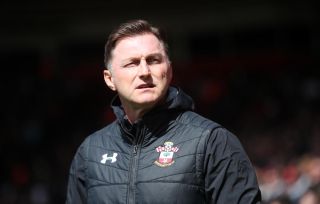 Southampton boss Ralph Hasenhuttl has demanded his side finish their Premier League season on a high despite heading into Sunday’s clash with relegated Huddersfield with little to play for.

A move up to 15th place is the sole remaining goal for Saints this season but apart from the financial boost associated with climbing the table, Hasenhuttl wants to see a reaction to last week’s 3-0 defeat at West Ham.

The loss at London Stadium infuriated the Austrian and he believes the way his players respond against the Terriers could play a part in the post-season planning which begins soon after the final whistle.

Hasenhuttl told a press conference: “This game gives us a serious chance to say goodbye in a winning way and that’s what I want to do with my team.

“That’s the reason I started this week with a very critical analysis of the last game because it was the not the game I want to see.

“It was a very clear message to the players and I’m sure we will give a reaction on Sunday. I think there were a lot of reasons why we played like that and we have to show that we can do it better.”

Hasenhuttl has been hailed for leading Saints clear of the relegation zone but the hard work does not stop there as the club look to continue their momentum into next season’s campaign.

“We’ve made a good first step and the fundamentals are built, and it’s important to use the time after the last game to make the right decisions for next year,” added Hasenhuttl.

Hasenhuttl will restore Angus Gunn in goal after he missed the defeat at West Ham, but defender Maya Yoshida is still ruled out due to the effects of a recent virus.