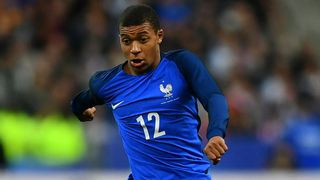 Ahead of hosting Belarus on Tuesday, France are a point clear atop Group A and a win away from qualifying for the World Cup.

Mbappe, 18, started for just the second time this qualifying campaign in the 1-0 victory over Bulgaria and was unable to have a major impact.

But Lloris backed the teenage forward, who has scored three goals in six games for Paris Saint-Germain this season.

"Mbappe needs to keep up with the French team. It's hard to judge a player's performance in the game against Bulgaria," the Tottenham goalkeeper said.

"It was more of a fight. It's hard to talk about the performance of a single player. The team fought, and we were in the duel and we won this game in a difficult way.

"Kylian should not be held entirely responsible. He's a young player, even if he's very talented.

"He still has time to make the next steps. He can rely on his talent because he is able to make a difference in the big moments."

France head coach Didier Deschamps rallied his team, reminding them the World Cup was the pinnacle.

"Players can play at the highest level in the biggest clubs, but there is nothing more beautiful than playing a World Cup. It's a global event for professional players," he said.

"The World Cup is the must-have. Sometimes you look at it in front of the TV. I watched two of them on TV.

"And I played a World Cup but we didn't need to qualify because it was at home."