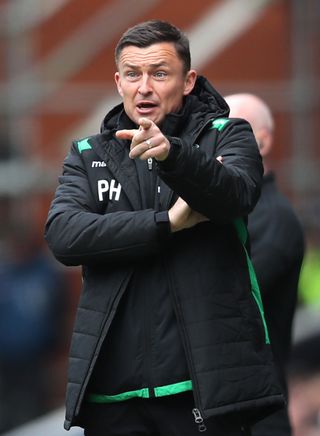 Paul Heckingbottom hopes his harsh words have the desired impact as Hibernian bid to end their season on a high.

The Hibs head coach branded his team’s performance at Kilmarnock “rubbish” last week as they fell to a 1-0 defeat.

Heckingbottom had held talks with a number of players in the run-up to the game about their futures with some told their time at Easter Road was up.

But he hopes the chance to say farewell with a win for the likes of Livingston-bound Marvin Bartley can inspire his players when they host Aberdeen on Sunday with the Dons competing with Killie for third spot in the Ladbrokes Premiership.

On their drop-off in performance last week, Heckingbottom said: “I can understand it but I think the players understand why I cannot accept it.

“It’s the time of year when players are not going to be with us next year. It can be a difficult time.

“I’ve said hundreds of times, the players have been fantastic since we’ve come in, everyone has seen the effort and endeavour.

“So it’s going to affect them. But it’s the nature of the game. It’s never a personal thing, there is always a reason behind it, and it’s always in pursuit of trying to get better.

“The process had to start for next season, really pushing ahead with those plans.

“But we are playing against another team just as hungry as Kilmarnock and they are exactly in the same position, so we know it’s going to be a tough, tough game.”