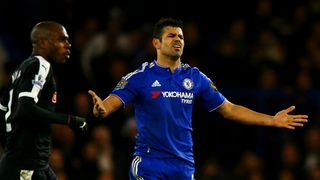 Spain international striker Costa missed the midweek 0-0 draw with Manchester United through suspension but is in contention for Sunday's clash with Crystal Palace.

With just five Premier League goals, Costa is the club's highest league goalscorer this season, but Hiddink believes other players need to support the Brazilian-born 27-year-old.

"Diego is focusing very much on his job and that's a lot of responsibility. He's brave and he likes to be like that," Hiddink said.

"It's a lot of responsibility, but not just on Diego. He has a big temper and wants to perform and is keen to score, but the other attacking players must play a part in assists and goals. It's not just him.

"There's a lot of technical skill in the midfield and attacking positions. We have to see how the players can become even more productive and take the next step.

"We're trying to get them into good positions in the box so that their high quality has more effect.

"They have the quality. Now they have to be productive with assists or goals. It's not just about Diego."