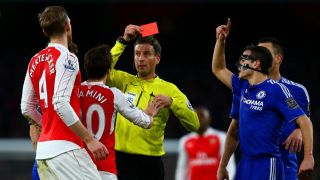 The German defender slid in on Chelsea striker Diego Costa, who was played through on goal by Willian and would have been one-on-one with goalkeeper Petr Cech but for Mertesacker's intervention.

Arsene Wenger described Mark Clattenburg's decision as "quick and harsh" but Hiddink felt the ruling was the correct one.

"No, there was no doubt, because you could see it was a beautiful throughpass from Fabregas [sic, Willian] on Diego," the Dutchman said.

"Diego could run straight on Petr Cech but was tripped and it was obvious that it was a red card without any discussion, I think.

"I would like to see the image and then I give a fair judgement but what I saw was he was tripped.

"I haven't seen the repetition so far but I don't want to go into a personal game but I had some doubts about the Fabregas penalty yes or no but I can understand why the referee did not give a penalty, fair enough.

"But on Mertesacker's red card, I haven't looked closely but it was always [a red card] I think."

The displays of Fabregas and Costa were a highlight of Chelsea's performance throughout to continue their improvement in form in recent weeks, although Hiddink said he did not have to spend much time encouraging the two to get better.

"[They're] just working every day, some talks, you must not think this is a big issue but I tried to focus them on what they're good at and not lose energy on other things," Hiddink said.

Despite the win, Chelsea remain stuck in the bottom half of the Premier League table, sitting in 13th and 14 points off the top four.

Chelsea captain John Terry believes the gap can be recovered and while Hiddink thinks it is a big task, he is willing to back his captain.

"It's a gap. If you see the results in the Premier League, how competitive all the teams are whether you're down at the bottom or high in the ranking. It's unpredictable which means all teams can beat all teams," he said.

"With this gap it's difficult to go fourth position but when the captain is saying that I'll follow my captain."