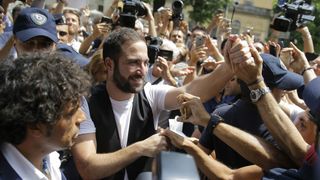 Gonzalo Higuain is determined to prove a valuable investment for Juventus following his €90million move from Napoli.

The Argentina international became the third most expensive transfer in history after agreeing to a five-year contract with the Serie A champions.

And the 28-year-old is now eager to show his value to a club that he believes has a strong winning mentality.

"In life, you make decisions thinking about what is best for you. I did that by choosing Juve," he said, speaking at his official presentation on Thursday.

"Obviously it wasn't easy, there were some long days with my friends and family. Juve is an important club on the world stage. One of my reasons was linked to the mentality of such a great group.

"They are a great team. They have a winning mentality and an incredible project. Now I have to show my worth and I hope to have a great season."

But the former Real Madrid forward was keen to stress the importance of the collective under Massimiliano Allegri.

"Juve have a great team in general, they're a collective where everyone plays for everyone else. That's one of the strengths of Juventus," he said.