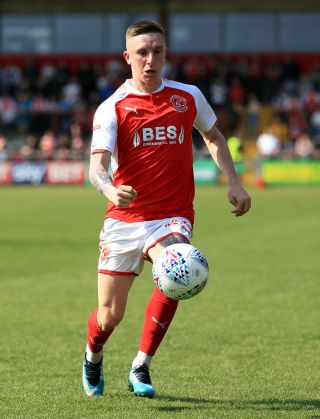 Fleetwood boss Barton has found himself in the spotlight following an alleged incident in the tunnel following last weekend’s defeat at Barnsley.

South Yorkshire Police are investigating the incident and have bailed a man who was arrested on suspicion of racially aggravated offences.

The former Manchester City and Newcastle midfielder on Friday posted a statement on Twitter “emphatically” denying all allegations made against him, with the issue dominating the news ahead of the visit of Peterborough.

However, it was Fleetwood forward Hunter who stole the headlines at full-time on Saturday after netting a stoppage-time leveller to cancel out Marcus Maddison’s opener.

Peterborough dominated the opening stages and had a great chance to take a 19th-minute lead when Maddison was ruled to have been fouled by Wes Burns in the box.

The Posh forward could not take advantage though, as Fleetwood goalkeeper Alex Carins dived to his right to keep out his penalty.

And that miss woke Fleetwood up with Paddy Madden firing over and then seeing his chip tipped away by Aaron Chapman.

Visiting striker Ivan Toney was a whisker away from opening the scoring at the start of the second half when his header skimmed the post before flying out of play.

But Peterborough finally got their goal when Maddison outfoxed Burns at the back post to fire home Alex Woodyard’s centre, the forward going someway to making amends for his penalty miss.

Fleetwood kept going, though, and got their reward in injury time through Hunter’s first-time finish.