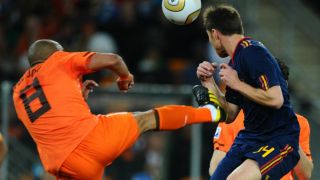 Former referee Howard Webb has admitted he should have sent off Nigel de Jong in the World Cup final between Spain and Netherlands in 2010.

De Jong was shown just a yellow card by Webb after a dangerous 'kung-fu' tackle on Xabi Alonso in the 28th minute.

Webb said he would have sent the Dutchman off if he had seen the incident clearly.

"I still thought I got it right on the pitch," he told BT Sport. "So I get back into the dressing room and my assistant referee has gone to his pocket and got his phone out, and his face dropped.

"I went, 'You’re joking?’. I got my phone out, a mate of mine in the police said 'Howard, it’s not a red card, it’s an arrestable offence’.

"Of course [I should have sent him off]. Even in the first minute of a World Cup final, if I’ve seen it clearly enough."

Spain went on to win the showpiece event thanks to a goal from Andres Iniesta in the 116th minute.