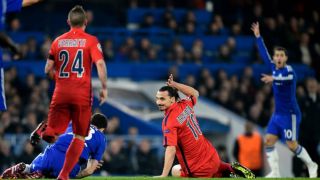 Ibrahimovic was sent off in the 31st minute of PSG's dramatic 2-2 draw at Stamford Bridge on Wednesday, which sent the Ligue 1 champions into the last eight on away goals.

The decision appeared harsh on Ibrahimovic, who was dismissed for a foul on Chelsea midfielder Oscar when challenging for a 50-50 ball.

PSG went on to produce a superb performance with 10 men to progress against the odds after extra time, with Chelsea boss Jose Mourinho calling for Ibrahimovic's red card to be rescinded in the aftermath.

But a UEFA spokesman told Perform: "According to the regulations, a red card means automatically at least a one-match ban.

"The UEFA Control, Ethics and Disciplinary Body will meet on 19 March to deal with this case, in other words they will take a decision on whether the player is suspended only for one match or more."

UEFA added that, under their regulations, a team has no right of appeal aside from in a case where a referee has made an obvious error such as mistaking the identity of the offending player.