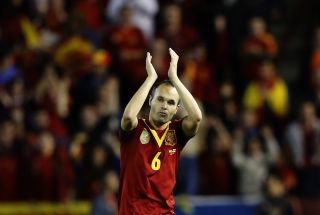 The current world champions welcomed Georgia to Estadio Carlos Belmonte on Tuesday needing only a point to guarantee automatic qualification to next year's Brazil showpiece event, but they never looked like failing to win.

Alvaro Negredo scored the opener for what was the team's 200th goal since Vicente del Bosque became coach.

Spain had not lost any of their previous four matches in Albacete and substitute Juan Mata added a second after the break to wrap up a 2-0 victory and top spot in Group I, leaving Iniesta feeling emotional.

He told Telecinco: "I felt a very strong emotion this evening. There was a mutual appreciation between the crowd and myself.

"It was a beautiful day and a good match.

"There was no better place for me to get into the World Cup in Brazil.

"We are all very happy."