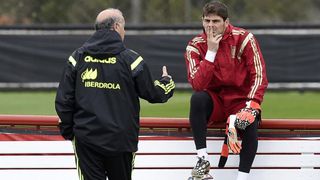 The veteran goalkeeper lost out to David de Gea in the starting line-up for the defending champions, and did not play a minute of their campaign, which ended with a 2-0 loss to Italy in the last 16.

And Iniesta admits it was something of a shock to see the team captain fall out with the coach who guided them to World Cup and European Championship glory.

When asked if he was surprised by the feud, he told Marca: "A little, at the start. But they settled the issue very quickly.

"They've known each other for a long time and I think they have a mutual respect for each other."

Del Bosque has since been succeeded by former Porto and Spain youth team coach Julen Lopetegui, who will take charge for the World Cup 2018 qualifying campaign.

Iniesta is looking forward to working with the ex-Barcelona goalkeeper and hopes he can guide Spain back to the summit of international football.

"The main thing is to wish him all the luck in the world, and that he can guide us closer again to the objectives that the national team have," he said.

"He's a coach who has experience at international level, with the lower ages. He's also gained it at various clubs and he's been a player.

"As players, we have to transmit the idea that he has."

Of his time working under Del Bosque, the Barca skipper added:  "I don't think there's much left to be said. Vicente's era was one of the best possible sporting situations. It was a very good road for Spanish football."