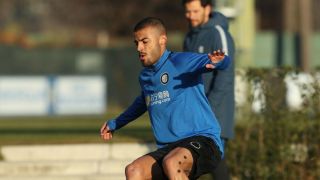 Inter have completed the signing of Barcelona midfielder Rafinha on loan until the end of season, the clubs have confirmed.

The Brazil international could make the move to Serie A permanent, with Inter possessing an option to purchase him before the end of his loan in a €35million deal that could rise by a further €3m.

It has been reported the fee will become will become mandatory if Inter qualify for the Champions League this season, in which case Rafinha will sign a three-year contract starting from July.

The 24-year-old is eager to join a club where he will play regular first-team football, having seen injuries restrict his involvement at Camp Nou in recent years.

"It's an important stage in my life and I had a lot of desire to approach this new phase in my career.

"There have been a lot of important players at Inter who have made history. I want to do my best and give everything to finish as high as possible and win titles with this shirt.

"I hope to play in as many matches as possible and help the team to reach our objective which is Champions League qualification."

Rafinha only made his first appearance of the season in the 1-0 Copa del Rey quarter-final first-leg loss to Espanyol last week, having missed most of 2017 due to knee problems.

Barca's club-record signing of Philippe Coutinho from Liverpool, along with last year's arrival of winger Ousmane Dembele, further limited chances in Ernesto Valverde's first team for Rafinha, who progressed through the club's youth system along with brother Thiago Alcantara, now at Bayern Munich.