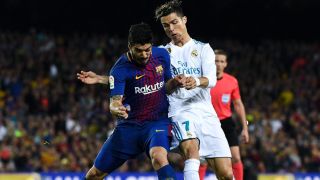 Luis Suarez insisted any rivalry he had with Cristiano Ronaldo was limited to their battles in LaLiga with Barcelona and Real Madrid.

Suarez's Uruguay come up against Ronaldo and Portugal in the last 16 of the World Cup in Sochi Saturday.

But the Barcelona forward played down any rivalry with Real Madrid star Ronaldo, saying the World Cup and international football was a completely different story.

"When it comes to Ronaldo at club level, that's different," Suarez said.

"We all try to do our best for our team. This is a World Cup.

"We are defending and working for our national team. That's the essential aspect."

Ronaldo (four goals) and Suarez (two) both enjoyed fine group stages at the World Cup, with the winner of their meeting to face either France or Argentina.