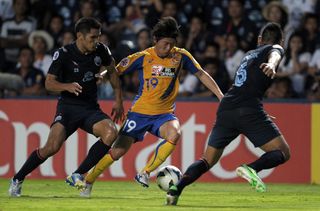 Second-half goals from Shingo Akamine and Kazuhiro Murakami secured the points for Vegalta, the latter's strike coming in the 91st minute, 10 minutes after midfielder Tomoya Ugajin had been sent off for the visitors.

Earlier a double from attacker Shinzo Koroki had levelled matters for Urawa, erasing a Vegalta lead that came through goals from Brazilian forward Wilson and Takuya Nozawa, only for a second-half collapse to mark their second defeat in three matches and move the hosts four points clear of the drop zone.

Gamba Osaka took advantage of Urawa's slip-up as midfielder Koki Yonekura hit home in the 58th minute to seal a 1-0 win over Kawasaki Frontale, whose faint title hopes took another blow with their eighth league loss of the campaign.

Attacker Yohei Toyoda scored a 92nd-minute winner against second bottom Cerezo Osaka to move Sagan Tosu into third place, six points off the top with as many games remaining.

Sagan are into the top three courtesy of the losses by Kawasaki and Kashima Antlers, who suffered a heart-breaking 3-2 home defeat to Kashiwa Reysol.

Tokyo's prospects of a top-three finish were dented as Omiya Ardija took another step towards safety by beating the capital club 1-0 to earn a fifth league win in six matches.

Bottom club Tokushima Vortis could be relegated on Wednesday after a 2-2 draw with Vissel Kobe kept them 16 points adrift of safety, while Sanfrecce Hiroshima overcame Nagoya Grampus 4-0 and Yokohama F Marinos were 1-0 winners versus Shimizu S-Pulse.