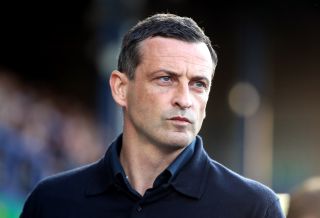 Hibernian boss Jack Ross says positive coronavirus results should not be grounds for postponing games after insisting confirmed cases should be treated like any other injury.

The Easter Road manager is planning as normal for Saturday’s trip to Paisley after his team’s clash with St Mirren was finally given the go-ahead on Friday night.

Buddies boss Jim Goodwin faces a goalkeeping crisis after seeing all three of his first-team stoppers ruled out of the Simple Digital Arena showdown.

Two of the Saints keepers – including number one Jak Alnwick – have contracted the virus and are now self-isolating, with the third also stood down and placed in quarantine as a precautionary measure.

While St Mirren have launched an emergency search for a new goalkeeper, Ross believes it is right the game goes ahead.

He has sympathy with Goodwin having been forced to do without midfield enforcer Alex Gogic for last month’s defeat to Aberdeen.

But he also sees no difference between being forced to do without a player because of a hamstring injury or a confirmed Covid-19 test.

Speaking before the Joint Response Group confirmed that match would go ahead, the Leith manager said: “As far as I know the game is on. I’ve heard nothing to the contrary.

“We’ve trained this morning and we’ll continue our preparations as normal. We’ve not even mentioned (the possibility of the game being off) to the players.

“But there is a likelihood that this situation will become a more common occurrence.

“We said that on the back of Alex Gogic’s case a couple of weeks ago and really this is about losing a player because they are unavailable.

“Now whether that is through a health issue or an injury, that is commonplace throughout a season.

“There are plenty of times when you have misfortune in that sense, you end up being light in certain positions – but you don’t call the game off.

“If you take a step back and look at it in a football perspective in terms of losing players, then it’s probably the same.”

Gogic has finally been allowed to rejoin his team-mates this week after he controversially missed the Dons defeat on the back of a false positive.

There was added frustration for the former Hamilton destroyer as he was denied the chance to make his international debut for Cyprus by rules which meant he still had to self-isolate for 10 days – despite testing negative 24 hours after his erroneous result.

Thankfully for the 26-year-old, he will not have to wait long for a second chance as the Cypriots face the Czech Republic and Luxembourg next month – and Ross has full faith he will finally get his hands on a cap.

“Alex is good,” he said. “He’s back with us after his period of isolation. In terms of his health, he was always asymptomatic, so there were never any issues in that regard.

“The period in isolation was a chance for him to also get over the disappointment of missing out on being called up for international duty.

“What Alex needs to recognise he was called up reasonably quickly into this season, which was huge for him.

“I think he’s spoken to the Cypriot national team and the indication is that if he continues the form he’s been in then he’ll be involved in their next get together.

“That’s terrific for him. That gives him ever greater incentive to continue in the manner he’s started. Hopefully when that comes around next time then he’ll be able to travel.”