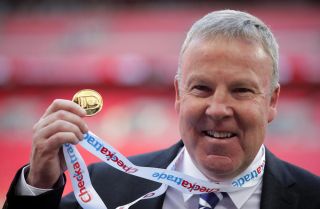 Portsmouth manager Kenny Jackett hailed the character of his players as they held their nerve in a penalty shootout to lift the Checkatrade Trophy.

Jamal Lowe thought he had won the game for Pompey in the second period of extra time, only for Sunderland to level in the dying seconds through Aiden McGeady.

That made it 2-2 and sent the game to penalties, where Black Cats midfielder Lee Cattermole was the only player to miss.

He was denied by goalkeeper Craig MacGillivray, with Ollie Hawkins converting the winning kick for Portsmouth.

Jackett told Sky Sports Football: “We had worked on them and had an idea of who would want the penalty and who wouldn’t and also who has taken them before – that’s a big one.

“But I’ve got to say the keeper made a key save and sometimes when you concede like that at the end it can get away from you emotionally in a penalty shootout, so we showed a lot of character to get five out of five.”

McGeady had opened the scoring for Sunderland as they dominated the first half, but Pompey were on top after the break and equalised through Nathan Thompson to force extra time.

Lowe believed he had snatched victory for Portsmouth, and he said: “I thought it was a winner but it wasn’t meant to be.

“Sunderland put on a good performance but I thought we deserved to win it in the end.

“We took a couple (of penalties) on Friday but that’s about it. You pick your place and go for it.

“The manager said at half-time that we needed to get a bit closer to them, get higher up the pitch. They had a lot of possession so it was up to us to press a bit higher and once we did that we were on top of them.”

Beaten boss Jack Ross admitted his Sunderland players were “sore” but was proud of their efforts.

He added: “When you lose any final it hurts, especially in the manner we did – a penalty shootout.

“It was two teams that have enjoyed good seasons because they are good sides and I think they showed that.

“Proud of what the players have given me today but ultimately we’re sore that we are not the winning side.”