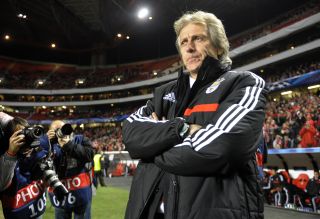 Fans paid tribute to Eusebio before the game, Benfica's first since the club legend - who won 11 Portuguese titles and one European Cup crown during his time with the Lisbon club - passed away on January 5.

The Benfica players all wore Eusebio's name on the back of their shirts instead of their own, and Jesus' men capped the occasion with a comfortable victory against 10-man Porto thanks to goals from Rodrigo and Ezequiel Garay.

Jesus feels that the result, which moved Benfica two points clear of neighbours Sporting Lisbon at the top of the Primeira Liga table, would have delighted Eusebio.

"I have no doubt that Benfica was far better than Porto," Jesus said.

"In addition we have scored two goals, we have created more opportunities.

"It was a difficult week, with many emotions and feelings.

"Eusebio will always be a maximum reference of Benfica and we wanted to make the fans happy with this victory, but we also played for him.