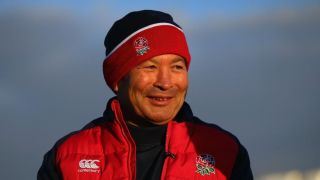 While Jones was in charge of Japan, he spent a day with the Bundesliga club in a bid to learn new techniques.

And the 55-year-old says his experience in Munich was so eye-opening it made him embarrassed at how he had previously been coaching his sides.

"I like watching other sports and was always fascinated by the way Barcelona played," he told BBC Sport.

"I loved the way they moved the ball into space, and particularly coaching Japan where I had a small team we had to move the ball and beat teams by moving the ball.

"So I thought, 'if there's one bloke in the world I should see, then it should be him [Guardiola]'.

"Luckily enough I was able to organise it and spend a really profitable day with him.

"I think I said I was embarrassed at the end about how badly I had been coaching for the previous two years, how hard he worked the players - these are the best players in the world, earning £300,000 a week and he was driving them to be better.

"It was all about working off the ball. I thought 'if this guy can do it then [so can we]."

Jones continues to be motivated by his time spent at Bayern and is refusing to put a limit on English ambitions.

He added: "We set ourselves limitations in rugby, and that is one of things I am hoping to change with England.