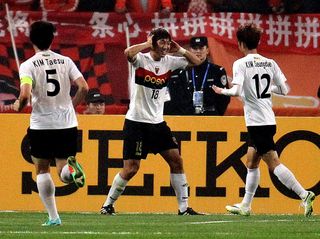 A 77th-minute goal from Kim Seung-Dae gave Pohang all three points against their struggling opponents, the attacker finding the net for the 10th time in all competitions this season.

Jeju United are a point further back in third following a 1-0 home success against rock-bottom Incheon United, who remain winless.

Chilean midfielder Hugo Droguett scored after 31 minutes to condemn Incheon to another defeat.

Suwon Bluewings dropped to fourth after throwing away two points in a 2-2 draw at Ulsan.

Jong Tae-Se and Santos Junior found the net to put the visitors in command, but Ulsan snatched a point with two goals in the final five minutes.

Kim Sun-Min set up a tense finish, before forward Yoo Jun-Su scored his third goal of the season to level the game.

Elsewhere, an early goal from Brazilian Fagner proved to be enough to give Busan I'Park a 1-0 win at home to Seongnam, while Gyeongnam played out a 0-0 draw with Sangju Sangmu.