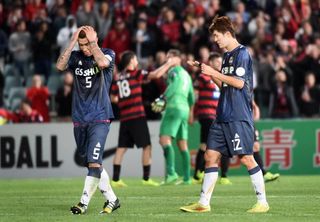 Following third-placed Pohang's 1-0 defeat to newly crowned champions Jeonbuk Motors, Seoul had the opportunity to move within a point of the AFC Champions League places.

However, the capital club fluffed their lines, throwing away a 2-0 lead against an Ulsan side with little to play for.

The visitors snatched a point thanks to a strike seven minutes from time from Brazilian forward Tarta.

Jeju United also failed to pull within striking distance of Pohang, with a 1-0 home defeat to Suwon Bluewings – for whom victory clinched second place – keeping them six points behind third spot and effectively ending their hopes of a place in Asia's premier club competition.

Kim Do-heon struck the decisive goal in the 73rd minute, the 32-year-old midfielder finding the net for only the third time this term.

At the other end of the table Sangju Sangmu continue to edge towards relegation after they could only manage a 1-1 draw at Incheon United, Juna Yang's 67th minute equaliser not enough for the visitors following Ivo's opener in the eighth minute.

With fellow strugglers Seongnam and Gyeongnam playing out a 1-1 draw, Seongnam remain three points adrift of the relegation play-off spot but their failure to take advantage of that result means that Park Hang-seo's men are still five short of automatic safety, which looks to be an unrealistic ambition with two games remaining.