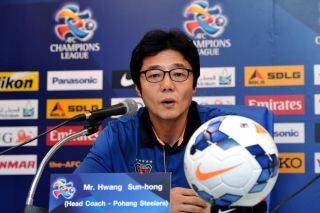 The Steelers came into the midweek championship round fixture with a three-point advantage over their fourth-placed hosts, but had won just one of their previous 10 matches.

However, with just one fixture left to play this season, Hwang Sun-hong's men successfully protected their cushion, meaning a draw at home to Suwon Bluewings on Sunday would be enough to seal a place in the Champions League third qualifying round.

Seoul have a better goal difference than the Steelers, so a victory by any margin at Jeju United this weekend would be enough for them to snatch third place should their rivals lose their final fixture.

In Wednesday's other match, Seongnam boosted their chances of survival with a 1-0 victory at Incheon United.

Kim Dong-sub found the net on the stroke of half-time to earn three points that haul the Korean FA Cup winners out of the relegation play-off position.