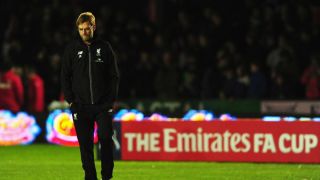 Liverpool manager Jurgen Klopp refused to be downbeat after seeing his side held 2-2 by Exeter City in the FA Cup, but felt the hosts were more robust throughout the third-round tie at St James Park.

Klopp made 11 changes from Tuesday's League Cup win over Stoke City and saw his youthful XI twice fight back to earn a replay at Anfield on a testing night for the Premier League outfit.

Jerome Sinclair cancelled out Tom Nichols' ninth-minute opener, only for goalkeeper Adam Bogdan's howler to allow Lee Holmes to score directly from a corner and restore League Two side Exeter's lead before half-time.

Brad Smith ensured Liverpool avoided a cup upset 17 minutes from time, but Klopp opted against being too critical of his players.

"They tried everything but we have to be more robust," he told BBC Sport.

"It was difficult on that pitch but Exeter did really well and had a few parts when they played good football. Maybe they know where [on the pitch]to play football and where to just have the long balls.

"You saw the players of Exeter and in one-on-ones they were more robust than our guys - they won too many headers and flicks-ons - but it's always difficult.

"Both goals were really unlucky for us. The first was the first offensive situation of the match and the second one... well, okay.

Tiago Ilori, Kevin Stewart and Ryan Kent all made their debuts on Friday and, with Liverpool's lengthy injury list, Klopp could be forced to call on his younger players again soon with Premier League clashes against Arsenal and Manchester United next up.

But Klopp refused to read too much into his side's display, adding: "How can I mix a team together and then say 'show me the future'?

"If I judge finally after just this game, no. It doesn't work like this. They helped us in our situation and now we have another game, that's all."