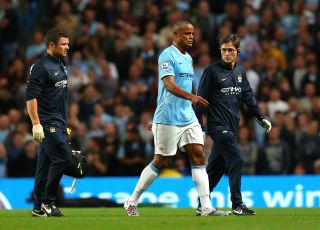 The Belgium international missed the 3-2 defeat to Cardiff City last Sunday after suffering a groin strain in the 4-0 win over Newcastle United on the opening weekend of the new Premier League season.

The news comes as a fresh setback to Kompany, who also missed much of the latter part of the 2012-13 season due to a calf problem.

He is now a doubt for City's UEFA Champions League opener next month, as well as the clash with Premier League champions Manchester United on September 22.

However, the 27-year-old - who joined City from Hamburg in 2008 - is confident that he can make a quick recovery.

"I'll be out for a little while but not too long," Kompany told the club's official website.

"I may miss the internationals (on September 6 against Scotland) but I hope to be back after that.

"I've been here before and I’m going to work hard to get back as quickly as possible.

"There are worse things that can happen but the only disappointment is that the season began so positively for me and everything went really well during pre-season.

"There is a protocol to follow with any injury and there is a time scale that goes with that. If I follow that schedule, I know when I’ll be back in a certain amount of weeks and possibly sooner.

"It is a freak injury that has nothing to do with the previous problems - it can happen - but I know when I return I’ll be absolutely fine."

City have recruited heavily in the transfer window, bringing in the likes of Jesus Navas, Fernandinho, Alvaro Negredo and Stevan Jovetic, and Kompany knows that further additions could also join the squad before the deadline.

"Maybe we will (make more signings) - I haven't kept in touch with any speculation so I'm not sure but with a few days to go I'm sure it is a possibility, as it is at any club of this size," he added.