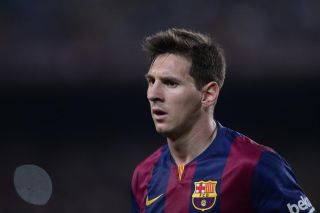 The former Roma and Celta Vigo coach returned during the close-season to the club where he spent eight years as a player and watched on as Messi netted twice in a rousing display on Sunday.

Recent signings Claudio Bravo, Jeremy Mathieu and Ivan Rakitic lined up alongside youngsters Munir El Haddadi and Rafinha in a new-look starting XI as Barca look to atone for a poor campaign last time out.

But the opening goal could not have been more familiar as Messi produced a fine finish after turning brilliantly on the edge of the box.

A straight red card for Javier Mascherano at the end of the first half appeared to give Elche hope, but 18-year-old debutant Munir remedied the situation with a delightful strike right after the break.

Messi put the game beyond Elche just after the hour mark with an equally impressive finish and ensured that the new era at Barca started encouragingly.

Luis Enrique claimed in the build-up that no other side can match his charges for determination, but bar a brief pause for a pitch-invading cat, Elche kept the hosts at bay with some resolute defending in the early stages.

Elche's defensive blockade frustrated Barca - without the services of the suspended Luis Suarez - at the beginning, Andres Iniesta finally carving them open in the 22nd minute as Munir went close.

The youngster produced a fine first touch to spin away from David Lomban after receiving Iniesta's throughball, but his powerful effort came back off the left-hand post.

Iniesta was integral again 10 minutes later as he fired a 30-yard warning shot against the crossbar.

Elche's resolve eventually broke in the 42nd minute, though, as Messi darted away from a crowd of defenders before firing a precise finish into the bottom-right corner.

However, the away side received a significant boost almost immediately as Mascherano tripped Garry Rodrigues when through on goal, earning the Argentinian a red.

Rafinha's league debut for the club ended at half-time as Luis Enrique sacrificed the attacker in favour of Marc Bartra.

The defensive switch had no negative impact on Barca going forward, though, as Munir doubled the hosts' advantage less than a minute into the half.

The teenager latched on to Rakitic's deflected aerial pass and produced a deft flick with the outside of his left foot, beating Przemyslaw Tyton from 16 yards with remarkable confidence.

Elche's attacking threat had been virtually non-existent and the match was put completely beyond them with 27 minutes to go.

Messi jinked past a couple of challenges on the edge of the box and expertly placed a pin-point effort into the bottom-left corner.

The Argentina star looked hungry to complete his hat-trick in the final stages, but the game ultimately petered out and Barca settled for a routine triumph.