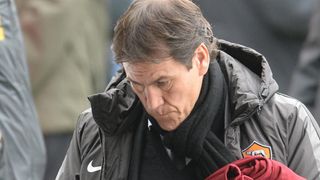 Verona held Roma to a 1-1 draw on Sunday with both goals coming in the first half, as Garcia's side endured a third straight stalemate in all competitions.

After captain Francesco Totti gave Roma the lead in the 26th minute with a 25-yard strike, an own goal from Seydou Keita 12 minutes later saw Verona draw level in front of their home fans.

The visitors were unable to find a way through Verona's defence in the second half and, while Garcia conceded Roma were tired following their Europa League tie versus Feyenoord on Thursday, the French coach insisted his team could have won but for their build-up play after the break.

"Verona weren't in the contest in the first half and the guys showed that if we move the ball about quickly, we can hurt any team," Garcia told Roma's website.

"In the second half, however, we weren't patient enough and the errors we made allowed our opponents back in the game. In the last 15 minutes, we were missing that bit of sharpness to find the final ball."

Garcia added that Roma should have scored more goals in the first half when they were on top: "We should have taken some of the chances we had. Aside from [Adam] Ljajic hitting the bar, there was also that great shot from [Radja] Nainggolan."

The result means Roma have drawn six of their past seven Serie A matches - the other ended in a 2-1 win at Cagliari - which has left the capital club nine points behind leaders and defending champions Juventus.

When his players' fitness was challenged, Garcia conceded the point, although he insisted that their fatigue was "normal".

"Is it a fitness issue? As I've said already, it's normal that we should drop off at the end just three days after the match against Feyenoord," he said.

"Verona were the fresher side."