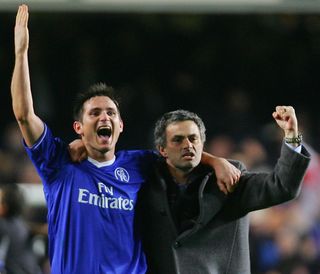 Mourinho is set to take charge of his first competitive fixture since returning to Stamford Bridge when his Chelsea side welcome newly promoted Hull City on Sunday.

And the 35-year-old believes the pair have founded the perfect medium in their professional relationship.

"The time he (Mourinho) came to the club before, he took my career a long way," Lampard said at the launch of his new book.

"It was more my mind-set rather than anything particularly tactical in football terms.

"I've always had a huge appreciation of that and, even when he wasn't at the club and has been away, we've stayed in touch.

"I wouldn't say (we're like) father-son because he has a very good way, as all the best managers do, of being quite familiar with you and helping you, but also remaining a manager.

"He's not a father figure too much, so you have to respect him. I think we've tried to find the right mix in our relationship and maybe we have done."