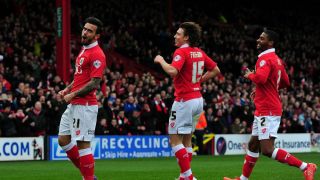 There is sure to be a party atmosphere at Ashton Gate after Steve Cotterill's men were 6-0 winners at Bradford on Tuesday to end their two-year stay in the third tier.

Bristol City now welcome a Coventry side who are not yet safe from relegation knowing three points will give them an unassailable lead over second-placed Preston North End.

"Hopefully it's the start of something big for Bristol City," Cotterill told the club's official website. "We're going to go to some good clubs and if we can replicate our football a level up, that will be great."

The race for the second automatic promotion spot remains wide open after Preston let a late lead slip against Gillingham on Tuesday.

Simon Grayson's men visit Port Vale on Friday, with the home team looking to arrest an alarming eight-match winless run that has left them just three points clear of the drop zone.

MK Dons will hope that Vale spring a surprise and then beat Leyton Orient in a crunch match at both ends of the table. Third-placed Dons are only three points adrift of Preston, while Orient are outside the bottom four on goal difference alone.

Swindon Town are still in the hunt as well and welcome already relegated Yeovil Town to the County Ground.

Sheffield United, 1-0 losers at Yeovil on Tuesday, can confirm their spot in the play-offs by beating Bradford City, but only if Rochdale fail to win at Gillingham.

Chesterfield will also ensure a top-six finish with a win at Oldham Athletic and a Rochdale defeat.

At the bottom of the table, Colchester United suffered an embarrassing 6-0 loss at Chesterfield and face a potentially make-or-break clash with Scunthorpe United - who are not out of the mire themselves.

Crawley Town and Notts County face a relegation six-pointer at Broadfield Stadium, while Crewe Alexandra seek to put distance between themselves and the bottom three against Walsall.