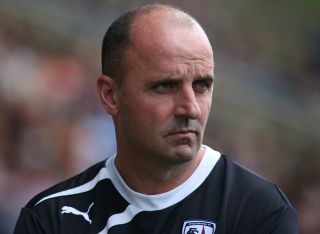 Paul Cook's side have picked up just one point from their last three games and were denied victory at second-placed Fleetwood Town last weekend when Jon Parkin scored a late equaliser.

Chesterfield hold a one-point lead over Fleetwood, who have the opportunity to go top with a victory at Southend United on Friday night.

But the hosts head into the game full of confidence following back-to-back league wins against Burton and Oxford United.

Oxford occupy third spot and will be out to maintain their unbeaten away record in League Two when they travel to bottom side Accrington Stanley.

James Beattie's side are in danger of being cut adrift at the bottom after failing to win any of their 11 matches to date.

Fourth-placed Morecambe are unbeaten in their last eight and they host an AFC Wimbledon side that have dropped into mid-table following a great start to the season.

A run of just four points from their last five games has left them 11th, but the gap to the play-off places is just two points.

Rochdale moved up to fifth by beating newly promoted Newport County last weekend and they make the long trip to Cheltenham Town on Saturday, while Exeter City will be looking to put their defeat to Hartlepool United behind them when they travel to a Scunthorpe United who have lost just once in 10 league games.

A resurgent Hartlepool side will be looking for a third consecutive win when Plymouth Argyle visit Victoria Park as they bid to move further away from the drop zone, while second-bottom Northampton Town go in search of their first home win since August against Dagenham and Redbridge.

Elsewhere on Saturday, managerless Bury travel to Portsmouth for their first game since Kevin Blackwell was sacked, while struggling Torquay United host Mansfield Town, who reside in the final play-off spot.

Bristol Rovers take on Wycombe Wanderers at the Memorial Stadium, while Newport face a home clash against York City, who beat them in the FA Trophy final in 2012.