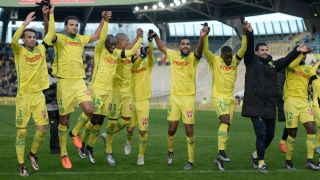 Nantes ended a run of five consecutive Ligue 1 draws with a 2-1 victory over Saint-Etienne.

Michel Der Zakarian’s side secured their first league win since November 4, as goals from Johan Audel and Kolbeinn Sigthorsson turned the game on its head after Nolan Roux’s early penalty for the visitors.

Lille are now unbeaten in seven matches in all competitions but they sit 13th in the standings after letting a lead slip in their 1-1 draw with Nice.

Yassine Benzia handed Lille the advantage in the 10th minute of the clash at Stade Pierre Mauroy but Niklas Hult rescued a point for Nice on the stroke of half-time.

The point was Guingamp's first since November, with the relegation battlers having lost five league games in a row.