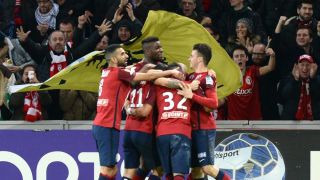 Lille coach Frederic Antonetti praised his side's determination after they qualified for their first ever Coupe de la Ligue final.

A 5-1 victory over Bordeaux in their semi-final at Stade Pierre-Mauroy on Tuesday saw the side extract revenge for their 1-0 defeat to the same opponents in the league on January 16.

Goals from Yassine Benzia, Adama Soumaoro, Eric Bautheac and Sofiane Boufal, as well as an own goal from Ludovic Sane clinched the memorable win for Lille.

Antonetti, who took over at Lille in November, was thrilled by his side's performance and hopes their cup triumph translates into league success.

Lille are 14th in the Ligue 1 table with just five wins from 22 games.

"Tonight the guys wanted it," he told France 2. "They had the chance to get revenge after the game against Troyes [a 3-1 loss on Saturday].

"The word was determination. The hard part now is to move up the rankings because we cannot stay 14th.

"The final will allow us to build momentum. The way we won was truly exemplary.

"If we continue with the spirit we showed tonight, there could be some nice surprises"

Lille will face either Paris Saint-Germain or Toulouse in the final.